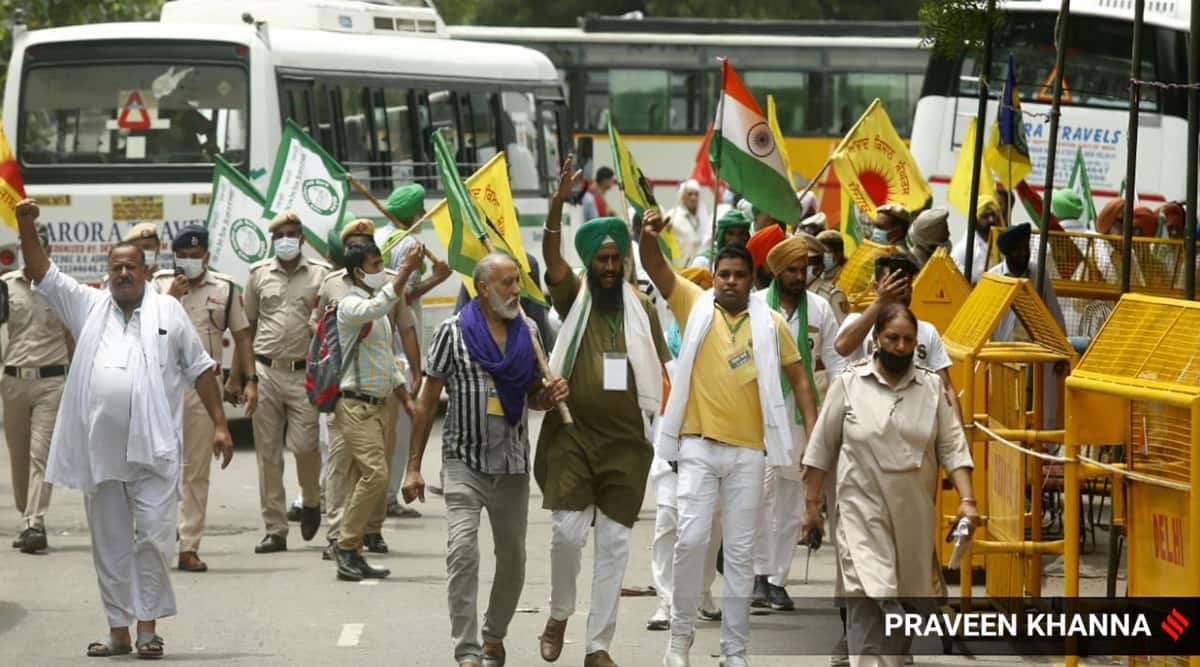 The Mandi system collapses, the Center must listen to us: Farmers’ choir in Jantar Mantar Day 2

Day 2 of the “Kisan Sangat” started in Jantar Mantar as planned, but this time with a stage, decent seating and shade. Protesters took turns explaining how the Mandi system is being destroyed due to the Center’s three agricultural laws.

Two hundred farmers were in attendance, most of them new faces, as they said they were attending the demonstration in batches. Delhi Disaster Management Authority (DDMA) under the LG had previously allowed farmers to protest at Jantar Mantar, although in small batches.

Police barricades surrounded the hangar, with dedicated entry and exit points. Flags of various shades of many farmers’ associations had been hoisted on barricades. At least eight standing fans had been arranged to cope with the scorching heat.

Farmers in Punjab and Haryana spoke about how the Mandi system is under duress – their speeches showing how much has changed since they started protesting at Delhi’s borders in late November of the last year. A speaker from Haryana said mandis have ceased to function in four districts of the state. Many have also raised questions about the Minimum Support Price (MSP) and the number of farmers who actually collect it.

Rahul Raj, an agricultural chief from Madhya Pradesh who continues to participate in the protests, was among the speakers. Speaking to the audience, he said: “The Mandi system has its flaws, but we were asking them to fix it. Instead, they completed around 80 mandis in the state. It ends up becoming completely privatized.

“The government did not buy moong and makki from farmers this year, but bought them privately. By discouraging us from cultivating certain crops, they indirectly encourage private actors. This is what happened with soybean oil, which is now only produced privately and costs around Rs 250 per liter. Previously it was less than Rs 100. If no one else grows it, private actors hoard it and the price keeps going up. He added that farmers and laborers struggled during the second wave of Covid because they were not receiving their dues and could not go to court either.

Farmers in Haryana and Punjab have said they will soon share the same fate if things don’t change quickly.

The speeches lasted until 5 p.m. when the protesters boarded buses and left for Singhu.

Part of the event was a play, in which a farmer who performed a “krishi mantri” defended the three laws. His justification of the laws was met with voices shouting “shame”. After that, the farmers had the opportunity to explain why they are wary of the laws. The protester who played the minister then agreed with them.

One protester said: “The intention of this play was to show the government that if it listens to us, we can all finally come to a conclusion.”

Prakreet Singh, a farmer from Tarn Taran, Punjab, said: “The laws must be repealed today or tomorrow. It was his first day at Jantar Mantar. He was carrying a card that had been issued especially for the day. Farmers said 200 new cards were issued every day. The numbers make it easier to move around when entering buses based on these numbers.

Two toilets had been installed by the authorities and two water tanks had been provided by the NDMC. A langar was organized by the Delhi Sikh Gurdwara management committee. A CATS ambulance was deployed on site and another ambulance, on the farmers’ side, was also present.

The ambulance had been arranged by Dr Swaiman Singh, who returned from the United States to assist farmers at the Tikri border. He has been at the site for eight months and wants to continue serving the protesters. He said, “Sometimes I want to come back… but nothing makes me happier than serving my people. He said he would stay until the protests were over, that is, until the laws were repealed.