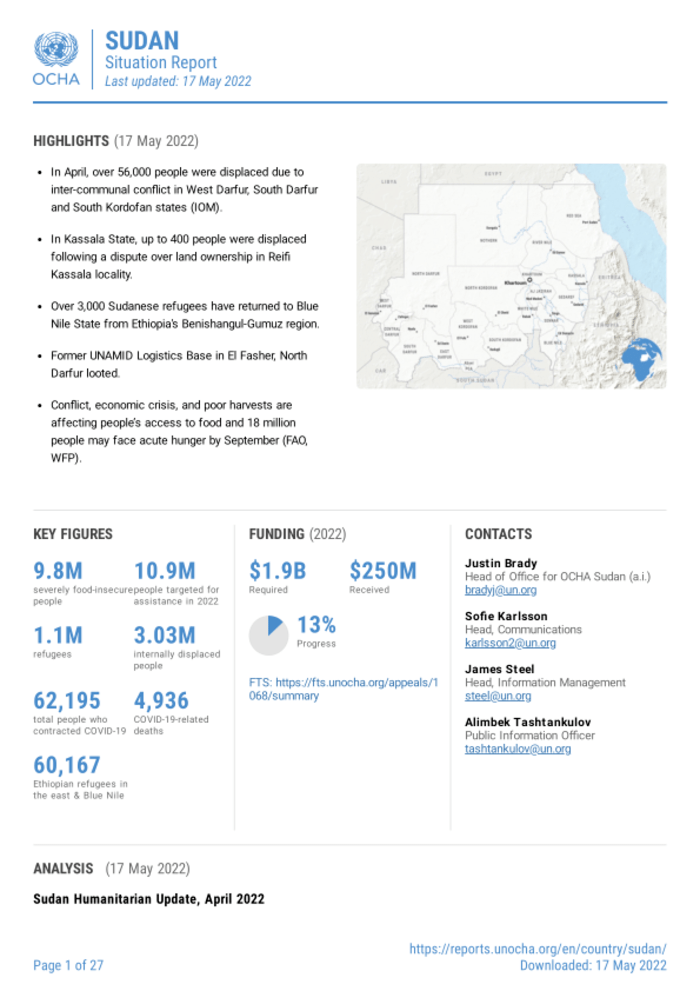 Thousands displaced due to intercommunal conflict in Darfur, Kordofan and Kassala

As of April 2022, more than 56,000 people have been displaced due to inter-communal conflicts in West Darfur, South Darfur and South Kordofan, according to the International Organization for Migration (IOM).

Armed clashes between Arab nomads and Masalit communities erupted on April 22 in the West Darfur locality of Kereneik, sparked by the alleged killing of two Arab tribesmen in the town of Kereneik by strangers. The executive director of Kereneik said that by early May, around 98,000 people (19,600 families) had been moved to 16 gathering sites in the town of Kereneik, while around 12,500 nomads (2,493 families ) had been affected by the conflict. Additionally, at least 165 people were killed and 136 people were injured in the clashes. These numbers still need to be verified. It is also reported that many families in Kereneik are hosting IDP families. During the conflict, 16 villages in the locality of Kereneik were affected, six of which were completely looted and burnt down, according to the Displacement Tracking Matrix of the International Organization for Migration (IOM DTM).

The executive director of Kereneik locality said that the majority of those who had taken refuge in the military camp have returned to their homes, leaving behind those whose villages were burnt down and who now need urgent assistance in shelter material.

The Federal Humanitarian Aid Commission (HAC) sent tents to distribute food, non-food items (NFI) and water assistance to the returnees. Local authorities have asked humanitarian partners to provide more shelter assistance. Priority needs in Kereneik identified during the missions conducted on April 30 (NGO) and May 4 (UN inter-agency) include access to drinking water, food, shelter and non-food items (S/NFI), health services and medicines. . During the mission, partners provided initial health care, S/NFI and water, sanitation and hygiene (WASH) supplies, and repaired three water pumps damaged during the conflict. The executive director of Kereneik praised the humanitarian efforts to help the nomadic community, as it will reduce tensions between communities and improve reconciliation efforts.

Fighting in Kereneik has spread to Ag Geneina and fighting between the two communities has been reported in various neighborhoods. On April 24, local authorities in Ag Geneina imposed a curfew on the Ag Geneina market from 6:00 p.m. to 6:00 a.m. the next day. Partners report that people from Althawra and Buhaira neighborhoods and displaced people from the Qadima school assembly site moved to the northern part of Ag Geneina town, and people also fled the El Jebel region to assembly sites in the town of Ag Geneina.

At least 2,900 people (569 families) have been displaced from the Kabos area in Ar Rashad locality, South Kordofan State, following an inter-communal conflict on 9 April between members of the tribes Kawahla and Al-Bedaria against the Sudan People’s Liberation Movement-North (SPLM-N) Al-Hilu Faction, according to IOM DTM. The displaced persons are currently seeking refuge in the village of Albatira, in the locality of Abu Jubayhah, in Southern Kordofan. IOM field teams report that one person has been killed and many people have lost property, cattle and/or livestock. The priority needs of displaced people are food, emergency shelter, and water, sanitation and hygiene (WASH) services. IDPs seek refuge in assembly sites/open areas (46%); with the host community (41%); and in schools or public buildings (13%).

In Kassala State, inter-communal clashes erupted on April 1 between the Sebderat and Beni Amir tribes in Eid-Siddna village of Reifi Kassala locality, Kassala State, over land ownership, causing a dead and others injured. Between 200 and 400 people (40 to 80 families) have been moved to the village of Hafara, while others are believed to have crossed the border into Eritrea. Several people were killed and dozens injured on all sides, while some houses in the affected villages were set on fire. On April 7, the chiefs of the Beni Amer, Habab and Sibarat tribes agreed to end the intercommunal clashes.

In addition, a border conflict was reported in Kassala State. Military sources told the media on April 6 that there had been clashes between Sudanese and Ethiopian forces at the border in the fertile agricultural area of ​​Al Fashaga. Military sources reported tensions, occasional clashes and “intrusions” by Ethiopian militias in Al Fashaga. There were no reports of civilian displacement or other impacts on civilians following reports of fighting in the area.

Looting of the former UNAMID logistics base in El Fasher, North Darfur

UN security reported that on the night of April 4, a group of local residents attempted to force their way into the former logistics base of the United Nations African Union Mission in Darfur (UNAMID). in El Fasher, North Darfur, with the intention of looting the premises. Government security personnel guarding the scene used tear gas and fired shots in the air to scare off the perpetrators. In the early morning of April 5, an unruly mob overwhelmed the security personnel and entered the compound and began looting it, while the security personnel guarding the premises retreated. To ensure safety and security around UN premises, additional police personnel in three trucks have been deployed to the area at the request of UN security. Looting of the former UNAMID compound continued throughout 5 April. This is the third case of looting in recent months, with the former UNAMID base in El Fasher being looted once on December 24, 2021 after it was handed over to Sudanese authorities and the second time on January 11, 2022.

The United Nations High Commissioner for Refugees (UNHCR) reported that by mid-May more than 3,000 Sudanese refugees had returned to Blue Nile State from Ethiopia’s Benishangul-Gumuz region. Over time, returns have also been observed from neighboring countries, including South Sudan and, on a smaller scale, Uganda; processes are in place to verify their presence and identify their places of return. UNHCR and its partners are continuously monitoring the situation to verify the arrival of returning refugees and assess their needs.

The spread of dry spells and crop failures in 115 localities in 14 states of Sudan affected 5.6 million people, while high prices of agricultural inputs affected the harvest, which fell by about 35% compared to to the previous year. The Food Security and Livelihoods (SAME) sector estimates that the number of people in need of SAME support in 2022 has reached approximately 15.7 million, which will be confirmed after the analysis of the situation is finalized. the Integrated Food Security Phase Classification (IPC) 2022 for Sudan. Sudan’s 2022 IPC analysis is ongoing and the final number of food insecure people for the current and projected periods will be available in June 2022.

According to a joint statement by FAO and WFP released on March 23.

Sudan is expected to face high humanitarian assistance needs through September 2022 due to the macroeconomic crisis and below-average harvests leading to high food prices and declining household purchasing power, FEWS said. NET in its April 2022 update. The number of households facing Crisis (IPC Phase 3) and worst outcomes is expected to remain high, particularly among displaced households, refugees and poor pastoral households, agro-pastoral and urban populations affected by a below-average harvest and low purchasing power. In March and April, prices of basic foodstuffs continued to increase, mainly due to reduced supply on the market following a below-average harvest, extremely high production and transport costs, devaluation of the SDG and above average demand for local wheat due to the high cost and shortages of imported wheat and wheat flour. In April 2022, staple food prices increased by an average of 10-15% compared to March and remained 200-250% higher than the respective 2021 prices and more than four to five times higher than the five-year average , reported FEWS NET.

The war in Ukraine is compounding existing challenges by disrupting agricultural production and trade in one of the world’s major food-exporting regions. The war threatens to further drive up food prices and create shortages, especially for countries like Sudan that depend on wheat and other exports (sunflower oil) from Russia and Ukraine. Since 2016, Russia and Ukraine have accounted for more than half of wheat imported from Sudan, according to the International Food Police Research Institute.

In this context, FSL partners provided 3.9 million people in Sudan with food and livelihood assistance from January to March 2022, according to the HRP 2022 periodic monitoring report. This includes 3.2 million people who received food aid and another 700,000 people with livelihood support. These 3.9 million people reached equate to approximately 46% of the overall annual target. However, in most of the 66 localities served (out of a total of 189 localities in Sudan), assisted people received only half of the food rations due to increased needs and low funding.

Funding for the 2022 Humanitarian Response Plan (HRP) for Sudan is low. So far, HRP 2022 has only received $249.1 million, or 12.9% of the total required amount of $1.94 billion, with a remaining gap of $1.69 billion. The UN and humanitarian partners call on donors to support the people of Sudan and provide rapid funding for humanitarian operations as the economic crisis, inflation, food insecurity and other challenges increase the needs, their severity and deprivations.

8 Practices Every Company Should Borrow From 5-Star Companies