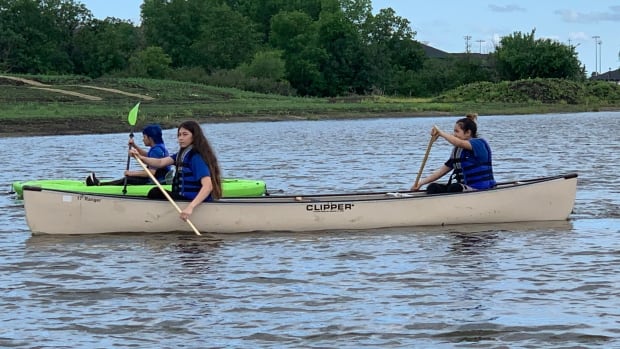 Hundreds of children have already experienced an 11-acre extension to Camp Manitou that includes a new lake and an accessible dock that allows children with mobility issues to get out on the water.

In addition to allowing the camp to offer canoeing and kayaking, the expansion also includes new bike paths and a pump track.

For 11-year-old Ben Wolodarsky, who has been coming to camp near Headingley, Manitoba, every summer for the past five years, the change is noticeable.

“It’s really changed a lot. Now that we have the lake, we can have a lot more fun at camp,” he said.

“Before we could never go in canoes or kayaks, now we can.”

The $9 million investment project expanded the site from 28 acres to 39 acres, including the 2.6-acre man-made lake.

When the camp began in the 1930s and well into the 1960s, participants swam, canoeed and kayaked in the Assiniboine River, which runs alongside it, camp director Audrey Hicks said.

“I looked back and read the story and looked at the pictures, it’s pretty amazing when you see what they were doing in the river, but it’s no longer possible for us to do that” , she said.

“And so that has now expanded and opened up that same opportunity for us.”

The lake features a dock with rollers that allow a canoe or kayak to slide across the platform. A person with mobility issues can then move from a seat to the boat, which can then return to the water.

The dock, which would normally cost around $60,000, was donated by Nor Col EZ Dock president Garth Krulicki and his wife.

“I wanted to be able to make a donation like this so that kids, all of them – no matter what ability – could get in the water,” he said.

The new bike lanes will give kids the chance to develop skills they wouldn’t normally learn riding on flat ground, Hicks said.

“When they are driving, the better they can brake, the faster they can go because they will be able to get out of trickier situations.”

In addition to having fun, the camp also gives children the opportunity to learn leadership skills.

The Wolodarsky program participant says he hopes to one day be a camp instructor and pass on the skills he has learned to other children.

The camp, operated by the True North Youth Foundation, also includes an NHL-sized covered outdoor rink. In the winter, the lake will be used for pond hockey.