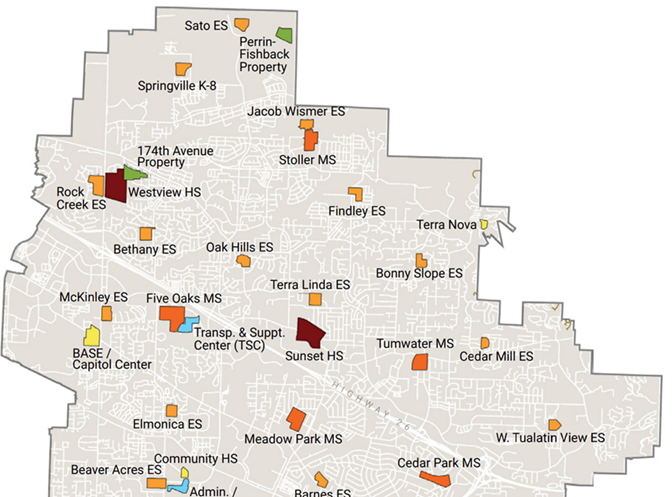 BSD Planning and the Next Obligation Measure – The Cedar Mill News

The Beaverton School District (BSD) Capital Improvement Bond will appear in the next ballot in May 2022. If passed, this 30-year plan would raise more funds for BSD to renovate buildings, add learning spaces, improve accessibility and replace student technology. According to BDS website, this would increase the current estimated average tax for Year 1 ($633) to $709 for an average assessed property value of $303,021. If this bond is not passed, the estimated average tax for Year 1 would be lowered to $509 (a decrease of $124).

On May 14, 2021, BSD released its Long Term Facility Plan (LRFP) on the department’s website. This plan included facility condition surveys, population measurements, and educational program evaluations. Through this, BSD identified areas that needed improvement, including:

These issues pose long-term challenges for BSD, and the district’s bond proposal aims to address those needs – an estimated $722.6 million bond that will cover all improvements.

BSD central office administrators expressed support for the bond, and in particular, Superintendent Don Grotting discussed it with the Cedar Mill News (CMN). “When buildings fall below standards, they need to be replaced or renovated,” Grotting said.

Shellie Bailey-Shah, BSD’s public communications manager, made similar statements. “In areas with consistent enrollment, the proposed link includes projects to add capacity…the district strives to provide a full and equitable educational experience for all students. This can be achieved in multiple ways by providing Equitable opportunities for educational programs and experiences School funding and staffing is based on enrollment, so students in one school will have as common an educational experience as students in another school.

Grotting directed CMN to facilities manager Joshua Gamez, but according to Gamez and Bailey-Shah, Gamez was unavailable for comment.

The bond proposal sparked extensive community debate on social media, with both sides expressing strong opinions. A community member, who prefers to remain anonymous, cited personal financial obligations as the reason for his “no” vote. “Schools charge too much money like that. Constantly. I am still paying off my own student debt and will be for many years to come. I would rather use any extra money to pay off my own student loans,” she wrote. “I want and need my [property] taxes to be lowered. These children can manage with the [Chromebook laptops] and tablets that they have now, and institutions can better budget or use the money. Or parents can raise their own money for their own schools.

Another community member said that “[she has] experienced the benefits of two school ties as teacher and parent. However, she argues that BSD’s success is limited by local building developments and the future pressure they will cause on schools. ” I also saw [firsthand] how school administrators and concerned district folks have had little say in when and where major real estate developments occur, even when they must legally weigh in.

For several years, in the required response to the proposed developments (the Supplier Letter), BSD has submitted a “boilerplate” letter which indicates that they will have the ability to accommodate the resulting student population growth without being specific or refer to already overcrowded schools. Oregon law does not allow school capacity to prevent development. BSD’s response was to change school boundaries and send children on buses to attend less crowded schools far from their neighborhoods.

Many in the community were dismayed to see our education system become more corporate. Consolidation for greater efficiency, including liberal use of buses, causes sleep deprivation from the first hours on the bus and eliminates networks of neighborhood friends. This has been a constant policy at BSD. Children are not gimmicks, and this lack of sensitivity to family and community needs may not be the best use of funds. Is it time to examine the values ​​of potential school board candidates?

Those in favor of bonds cite the importance of education, the pay-it-forward mentality, and the need for students as reasons for their support. They believe that funding is needed to increase Oregon’s high school graduation rate and that long-term community changes will increase financial demands. Still, some interviewees point out how BSD’s structural flaws have turned them against the link. “Throwing money at BSD doesn’t solve anything. I’ve seen so much waste [of funds] in schools. Do they really need a touch table to play chess in the library? I asked the administrator, and these were purchased with bond funds. What about the land they bought east of Westview High? It’s too small to be developed as a middle school, and just big enough for an elementary…but Rock Creek [Elementary] is just across the street. And they say it’s “less desirable due to access constraints”. The problem is not the money. It’s that the administration doesn’t know how to spend it. Why would I give my money to a district that would waste it and ask for more on the next bond proposal? »

A former BSD student commented that “In recent years, BSD has really gotten worse. They spent their money on things that were never used, and it doesn’t make sense to give them more money. It’s like rewarding them for wasting money…with more money.

The proposal also raised questions about issues that the LRFP has not resolved. One of the most important topics revolved around population growth and the area north of Highway 26. Currently, schools north of Highway 26 are overcrowded (e.g., Stoller Middle School), and the president of CPO 7, Mary Manseau, sees this as a major problem. “What are the barriers to providing enough neighborhood schools north of 26?” asked Manseau.

To this, Bailey-Shah responded that “district planning demonstrates that there are sufficient numbers of schools and sufficient capacity north of Highway 26 to support student enrollment in this area. If long-term population projections indicate significant enrollment growth, the district has property north of Highway 26 on which schools can be built.

Grotting elaborated by referring to the county’s declining enrollment rates. “The population is expected to decline over the next few years, based on Washington County birth parameters,” Grotting explained. “We are paying close attention to demographics, and new data shows enrollment will decline. Overcrowding north of 26 won’t be as big of an issue.

Manseau and many other residents are unhappy with those responses, arguing that demographic trends could change. “In the late 1980s, when my son was reaching elementary school age, BSD sold the only college site he owned north of 26, and a conversation was going on about whether BSD would mothballs at Oak Hills Elementary School. Just over 30 years later, we have two middle schools, Oak Hills needs to expand, and we have five new elementary schools to serve the booming residential population north of 26,” Manseau said. Currently, BSD’s LRFP shows two empty sites in the northern region – the 174th Avenue site east of Westview High School and the Perrin-Fishback site (near Springville Road and the northern boundary- east of the district – see map). The LRFP notes that the 174th site is not easily accessible from the main road (making it “less desirable”), and the Perrin-Fishback site is only 10 acres (elementary school size) and quite close to the elementary Sato.

The same demographic trends propelled the BSD Futures study. BSD has created five approaches to homework. Consolidation and busing are a common theme, and Grotting said these are long-term strategies. “Consolidation and busing is a long term plan as the district decreases in population and schools may be closed. All options [in the document] are on the table,” he added. “I’m aware that construction will lead to more inequalities, like how Mountainside is better than Sunset…we consider environmental impacts, traffic, low incomes and reduced meal plans. But what’s best overall may not be right for individual families.

Grotting noted that BSD wants the public to be involved in decisions, referring to open houses, polls and other forms of community outreach. “We just completed a survey that reached 500 to 600 people,” he said. “And we’ve been talking to people since last year with our BSD open days.”

Cedar Mill News has created a spreadsheet for readers to calculate their personal financial impacts of each BSD bond option. To use it, sign in with your Google account and make a copy of the form.

As election season approached, BSD representatives reached out to CPO 1 and we invited them to speak about the obligation measure as part of the April 12 CPO 1 meeting. Bailey-Shah encourages residents to visit the neighborhood bond site, where they can view district videos, cost breakdowns and bond FAQs. The LRFP 2021 can be found on the BSD long term planning page.