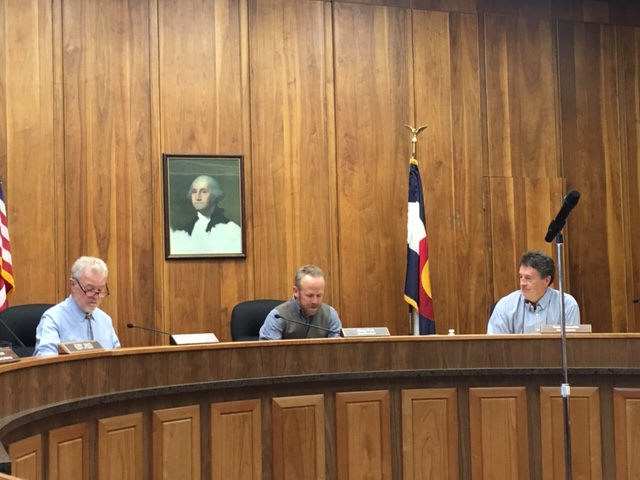 With no shortage of public comment on Aspire Tours’ plan to develop a campground and outfitter on County Road 190, Chaffee County Commissioners continued hearing Tuesday until their meeting on April 12.

At issue: An appeal of the Planning Commission’s approval of the Aspire Limited Impact Review. The appeal was filed Feb. 8 by attorney Tom Wagner of Anderson Law Group, representing adjacent landowners and the CR 190 Initiative group.

The arguments for and against the 44-acre proposal have remained essentially the same through the lengthy approval process, with neighbors continuing to battle potential noise, traffic and associated dust, fire danger and impacts on the water. There were many questions about shuttle traffic and guests needing to travel off site for recreational activities and meals. Further, Wagner said there were sufficient procedural and substantive flaws for the application to be dismissed or reconsidered.

Devin Castendyk, Ph.D., a hydrogeologist and neighbor who has installed and tested wells, said recent tests that were presented after the Planning Commission decision were inadequate. He questioned the long-term yield and mineral concentrations, among other factors.

Concerned about neighboring properties and whether guests would adhere to fire safety practices, critics called the recent Marshall Fire in Boulder County a cautionary tale. Other speakers spoke of a neighborhood that would be changed forever. Ken Tiegs, who lives nearby, said neighbors lived with “peace and quiet and peace of mind” in the rural riverside area, and that the county and its regulations had “ignored the very people they are meant to protect” while “appearing to bend over backwards to accommodate Aspire”.

Eric Stein, Aspire’s legal counsel, outlined the company’s plans for the site, which includes 10 campsites, five guest cabins and one staff cabin, a rest area and outfitter, as well as a a future residence of the owners. He argued that the Planning Commission’s findings were correct and that Aspire had resolved the remaining issues regarding water supply and quality.

Several people, many from outside the county, commented in favor of the proposal, including Jennifer Bartlett-Enriques de Lafayette. She described the project as adding value to the community and attracting “high-value international” travellers.

Aspire will have the opportunity to address naysayers’ concerns again at the April 12 meeting.